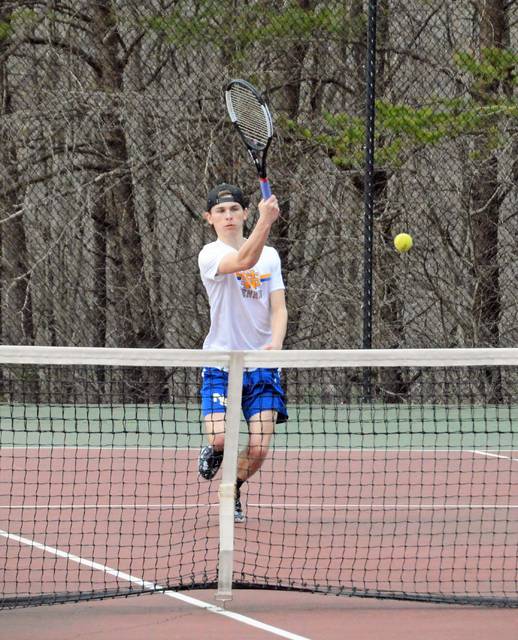 North Surry’s Cole Richardson returns at the Greyhounds’ No. 1 seed in 2020. -

Both North Surry and Surry Central recorded wins in the Western Piedmont 2A Conference on Thursday.

The Greyhounds (1-0) actually opened the season on March 3 at North Forsyth, but the match was postponed due to darkness. North Surry led 4-2 overall after singles and led each of the three doubles matches by three games when the call was made. The match will be continued when North Forsyth travels to North Surry on April 8.

If North Surry’s lineup looks eerily similar to last year’s, that’s because it is. The Greyhounds didn’t graduate a single player in 2019. Even this year, there were only two seniors in the starting lineup for Thursday’s match.

Those two seniors are the No. 1 and No. 3 seeds for North, Cole Richardson and Dalton Quesinberry. The duo helped the Greyhounds secure a 9-0 win over Walkertown Thursday.

Unlike North Surry that nearly has an identical roster as 2019, Surry Central had to replace three starters from last year.

First-year Central head coach and longtime assistant Mason Midkiff has just one senior this year, three juniors, two sophomore and three freshman. Two of those freshman are started at No. 1 and No. 3 singles on Thursday.

Surry Central played two road matches earlier in the week as well. The Golden Eagles fell to East Surry 7-2 on March 2 and then 7-1 to Atkins on March 4. Central broke into the win column Thursday by defeating North Forsyth 9-0.

No. 1: Pardue and Vaughn (SC) def. Tony Rodriguez and Serrano-Lazo 8-4