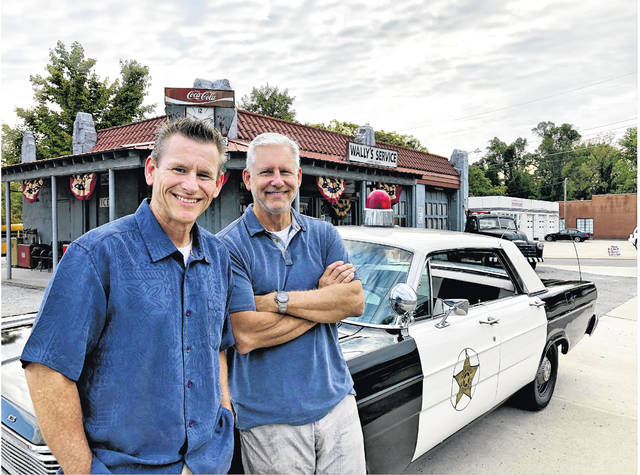 Brothers Cort Howell, left, and Stark Howell, will be overseeing the production of the feature film, “Mayberry Man.” Cort, producer of the film, said the effort will launch its Kickstarter fundraising campaign Jan. 15 at The Loaded Goat in Mount Airy, beginning at 5:30 p.m. - 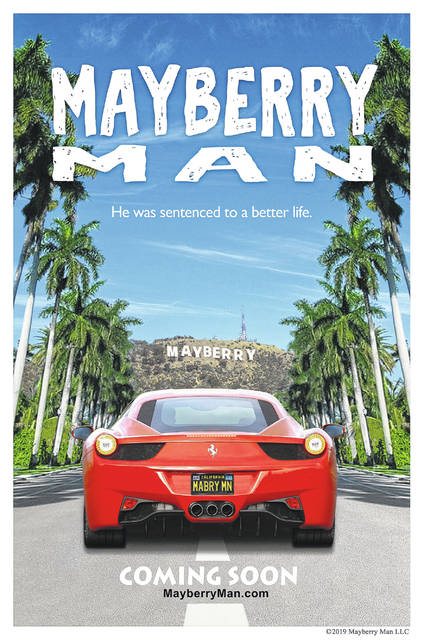 A promotional poster is shown for Mayberry Man, a movie inspired by the annual Mayberry Days Festival held in Mount Airy each September. -

A little more than four months ago, a group unofficially calling itself The Children of Mayberry announced plans to do a feature film entitled “Mayberry Man.”

Now, they’re opening up the possibility for “The Andy Griffith Show” fans to take part in the project, both as contributors to funding the production as well as having an on-screen role in the film.

The movie, first announced in August, is a project being put together largely by children of Andy Griffith show actors. Brothers Cort and Stark Howell, whose late father Hoke Howell played Dud Wash in the series, are two of those Mayberry children behind the project, as is Gregory Schell, son of Ronnie Schell. Stark Howell will be directing and writing the movie, while his brother and the younger Schell are producers.

Cort Howell said he expects to start some early production work in May, with filming to begin in earnest on Sept. 22, during Mayberry Days in Mount Airy.

Thus the start of the fundraising campaign next week at The Loaded Goat.

“When fans pledge their support for the movie project on Kickstarter.com beginning Jan. 15, they can claim from a wide range of rewards such as getting their name in the credits, a DVD of the movie, Mayberry Man merchandise, passes to a red carpet premiere, or they can even be in the movie,” Howell said.

“Mount Airy is Mayberry, so we are very excited about this movie,” said J. Scott Freeman, owner of The Loaded Goat. “At this event, we will be revealing some special ways our customers can participate in the movie that won’t be announced anywhere else.”

In “Mayberry Man,” an arrogant movie star is arrested for speeding in a small Southern town. Rather than levy a big fine, or sending the star to a local jail, the judge exhibits a bit of folksy wisdom Andy Griffith fans will appreciate as a story line which pays homage to one of the more popular episodes of the series, “Man In A Hurry.”

The judge sentences the man — who clearly has no time nor interest in the lives of everyday people — to attend Mayberry Days, the annual week-long festival celebrating “The Andy Griffith Show.”

Stark Howell said it was a trip to Mayberry Days in 2018 that inspired him to pen the movie’s script.

“I’ve always been a fan of the show, but I was shocked to discover the spirit of Mayberry still exists today within the tight-knit Mayberry fan community,” Howell said of that visit. “It’s the perfect setting to tell a modern-day, family-friendly story that expresses the virtues of the fictitious town of Mayberry that we all fell in love with so many years ago.”

A number of stars from “The Andy Griffith Show” have signed on to appear in the movie, according to Cort Howell. Among them are Betty Lynn, who was Thelma Lou in the series; Clint Howard, the peanut butter and jelly sandwich-eating Leon; Maggie Peterson (Charlene Darling); Ronnie Schell (who played in two different roles); and Keith Thibodeaux (Johnny Paul Jason).

Early on, Cort Howell said they decided to seek the independent film route, because that meant more freedom to craft the movie as they see fit.

“Our goal is to make a quality film for the fans,” he said, rather than following a formula dictated by a studio.

Formula or not, a film project of this magnitude needs funding, so Howell said they’ve opted to go the Kickstarter route, where fans can contribute money toward the work — and get unique items in return.

For a $10 donation — known on the movie’s Kickstarter page as an Ernest T. pledge, fans will receive an invitation to “an exclusive online screening of the movie” as well as see their name in the closing credits with a “special thank you.”

For $25 — a Charlene level pledge — donors get the Ernest T. prizes along with a digital download of the movie, while a $50 donation, known as a Briscoe Level pledge, will include a DVD of the movie autographed by the director.

Pledge levels go higher — $100, $150, $200, all the way up to $5,000 (a Barney level pledge) and $10,000 (an Andy Level Pledge). Prizes also become more coveted, including T-shirts, VIP passes to private cast and crew screenings, even a listing as an associate producer. The top two levels — the Barney and the Andy — carry opportunities for the donor and his or her entire family to have speaking roles in the movie, even a co-starring role, along with other perks.

Next week’s event in Mount Airy is one of three fundraiser launch parties — the others are in Danville, Indiana, site of the annual Mayberry in the Midwest festival, and in Burbank, California.

“The way Kickstarter works, it’s important to get a lot of momentum early, to get early support,” Howell said of having three different launch parties. “We’re doing what we can to create a lot of buzz, to get a good start.”

The event in Mount Airy will be from 5:30 p.m. to 9 p.m., and will include live entertainment by the George Smith Band, door prizes and special opportunities for fans to participate in the movie. Reservations are being accepted and can be made by calling 336-755-3627.

Once the fundraising campaign is behind them, Howell said the crew will begin some preliminary film work in Danville, Indiana, in May, then do a lot of filming during September’s Mayberry Days in Mount Airy — including a day-long shoot at The Loaded Goat.

The movie’s eventual premiere will be sometime in 2021, although Howell said they have not yet set a specific date.

“Our goal is to turn it around quickly, we’re going to have a lot of fans who have invested in the film. We want to deliver, overdeliver, to make sure we have a lot of happy fans.”

Afterward, he said producers will see about commercial distribution, which could include streaming services. “We absolutely will look at Netflix and Amazon as options,” he said.

For now, though, Howell said producers are concentrating on the fundraising stage, and he hopes there is a big turnout of interested fans next week at The Loaded Goat.

For more information on Mayberry Man and participating as a donor, visit www.mayberryman.com.