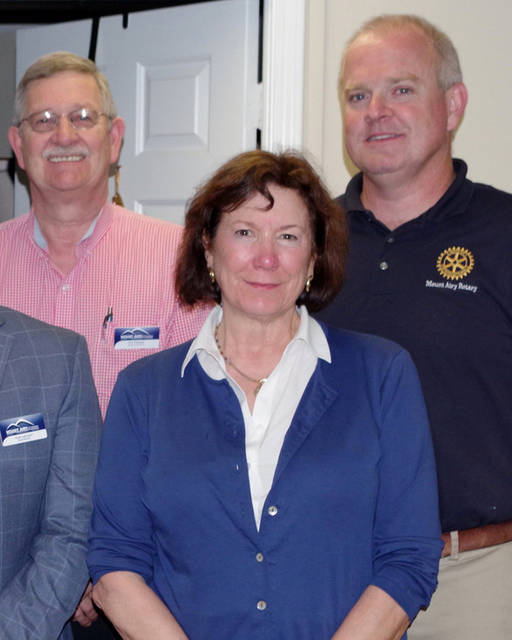 Mount Airy Board of Education member Kate Appler, seen with fellow board members Phil Thacker, left, and Ben Cooke, is retiring next month, creating an opening in the north end of the city. - Jeff Linville | The News 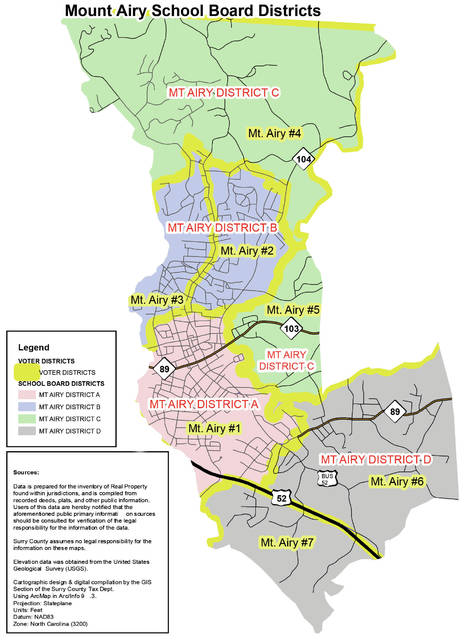 The Mount Airy Board of Education is looking for folks interested in serving on the board with the announcement of one retirement.

Longtime board member Kate Appler said she will be retiring as of June 27, the last board meeting of the fiscal year that ends June 30.

Appler said she has been on the school board for 14 years. Her children are long gone from school, and she is in a different place in her life now.

In her day job, Appler has been the district administrator since 2013 of Surry/Stokes Guardian ad Litem, a volunteer-based program that trains volunteers to visit children, learn their needs and wishes, and advocate for the children who are in the custody of Department of Social Services.

Not only does that job take up her day, but Appler said she also does some training in the evenings, too, which makes it difficult to find time to devote to school projects.

She said she might also start winding down from her job as well, looking at possibly retiring within a year.

Once her days are free, she said she would like to do some volunteer work for good causes.

“There is no lack of volunteer opportunities in this community,” she noted. She previously was executive director of the United Fund of Surry.

Appler said she isn’t originally from this area. When she and husband Dr. Mark Appler were looking at some place to settle down and raise a family, she was intrigued by how many people she met in the Mount Airy area who had left, but came back to raise their kids here. That sold her on the Granite City.

Asked what were some of the good parts of being on the school board, Appler said, “I liked working as a team for the children. Someone told me early on to remember that it is about the children. That was the best thing anyone could have said to me.”

“It is easy to get onto other issues,” she said. Or have a decision affected by someone who isn’t happy. “But keeping your eye on the prize, what is best for the kids, was the mantra to keep in front of me.

“There’s never been anybody who was doing it for other reasons. That is easy to happen with elected officials, but I have not had that experience on the school board. We worked together to do the best we can do to offer them an education.”

What has been challenging about the position?

“You’re dealing with people, working with flesh and blood children,” she said.

“You’re trying to get test scores and want to get to a certain place and show off good results. If they are having a bad day (or their lives are in a bad situation), it can be frustrating not to have the results you expected to have.”

The school board and the central office have put a lot of work into finding the strengths and weaknesses of teachers to benefit the students, she stated.

To that end she thanked Cross Creek Apparel for changing the paradigm in Mount Airy.

There was a time when students dropped out of school when they turned 16 to seek work, but Cross Creek said that they would wait to hire employees after they reached 18, so more kids stayed until graduation, she believed.

Over the past generation or generation and a half, the city and county schools have been working with graduation rates in the 90th percentile, so that is a big change, she added.

One area where Appler recently displayed some frustration was the Surry County Board of Commissioners voting to change school board elections to a partisan format.

At a meeting last month involving all three school districts in the county, Appler spoke up to say, “I’ve been on the school board for 14 years, and I never knew which party anybody was, and that didn’t matter. It was always about children.”

As for the position that is opening, the city schools has put out a statement that the school board is accepting letters of interest to fill the vacancy for voting precincts #4 and #5.

The #4 territory covers the area along Main Street north of Lebanon Street and out to Riverside Drive, including Mount Airy and Cross Creek country clubs. The #5 precinct is east of Renfro Street going out N.C. 103 past the granite quarry.

Appler said that she knows that there are a lot of capable people in the districts that she represents, so she’ll be leaving the board in good hands.

“An individual seeking candidacy must be a qualified voter of at least 21 years old and must reside within the district,” says the school’s statement. “To check that you reside in voting precinct #4 or #5, please visit the Surry County GIS website and follow the directions below.”

1. Type your address in the “Search by address” field;

Letters of interest can be sent to school board chairman Tim Matthews at tmatthews@mtairy.k12.nc.us. Letters will be accepted until the end of June 14.

Recipe of the Day